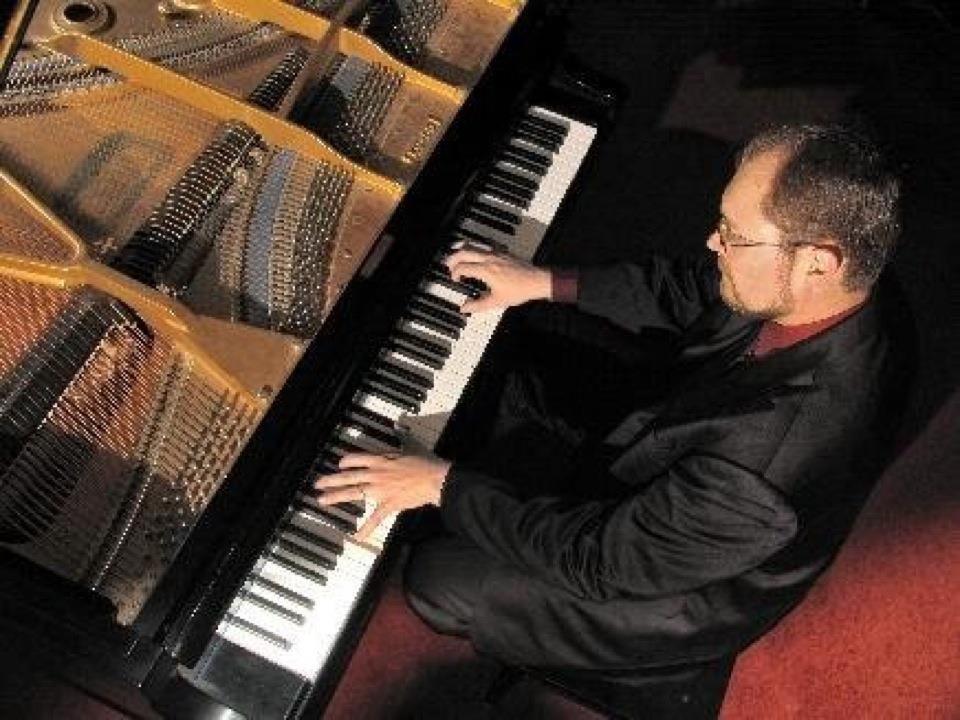 As far as first-call saxophonist and Northeastern State University director of jazz studies Tommy Poole is concerned, his contemporary Scott McQuade  is a great example of “the perfect working musician.”

It’s not surprising at all that Poole, another busy Tulsa-area performer, is in a position to make that evaluation. The two of them, he says, have “played together countless times, in countless configurations – I don’t know if I’ve played a lot of pop music with him, but we’ve done a lot of straight-ahead jazz and traditional New Orleans-style jazz together, all kind of jazz stuff.”

McQuade, he notes, “just has so many skills and is able to do so much.”

“Scott will be playing from the piano chair of the Jazz Ensemble,” says Poole. “The NSU Jazz
Ensemble is going to play by itself, with no guest artists, for the opening song of each half of the concert. Then, beginning with the second song through however many songs we do each half, Scott McQuade will sit at the piano chair.”

Poole adds that he himself will be playing on “one or two numbers,” including an arrangement of Duke Ellington’s “Take the `A’ Train” by Rob McConnell, known for his work with the Boss Brass band in the ’70s and ’80s. And three other guest players, he says, plan to be coming along with the 17-piece NSU Jazz Ensemble Sunday.

“Two of them are friends of mine from the Tahlequah area who play great trombone: Dr. Chuck DeShong and Orien Landis,” says Poole. “Chuck used to teach English at NSU – he’s retired now – and Orien is a band director at Tahlequah High School. And then we have Jim Masters, who’s a trumpeter. He graduated with a music degree from NSU a couple of decades ago – a very, very good trumpet player.”

All of these performers will be turned loose on a repertoire that leans heavily toward classics of the big-band era, including “All of Me,” the Duke Ellington standard “In A Mellow Tone,” and Buddy Rich’s arrangement of “Love for Sale.”

“Then I’m going to throw a curve ball with `Time Remembered,’” says Poole. “`Time Remembered’ is a composition of the great pianist Bill Evans, and it’s a beautiful song. That one is probably the most complex chart we’ll do the whole night.”

“They led one of the most influential hard-bop jazz quintets of all time,” notes Poole, “and that song was one of their hits.”

Poole, who’s been in charge of the NSU Jazz Ensemble for the past five years, is exceptionally bullish on this year’s version of the big-band styled group.

“I’ve got a lot of great students, a lot of great improvisers in the band,” he says. “You’re going to hear them get up and play some really good solos. This band is rock-solid, and they get excited about coming up and playing the Jazz Hall of Fame. It’s always a great crowd that comes out, a warm audience and a really fun audience.”

The NSU Jazz Ensemble, with guests Scott McQuade and Tommy Poole, is set to

begin at 5 p.m. Sunday, April 6, at the Oklahoma Jazz Hall of Fame, located in downtown Tulsa’s Jazz Depot, 111 E. First St. Tickets can be purchased at the Depot, from www.myticketoffice.com, or by calling Bettie Downing at 918-281-8609. General admission is $15, reserved table seating $20. Seniors and Jazz Hall members are admitted for $10, and high school and junior high students for $5.  Refreshments will be available for purchase.

The show is a part of the Jazz Hall’s 2014 Spring Concert Series.

Thank you Tulsa Remote for inviting the Taylor Entertainment Group, Tulsa Jazz, and the Cynthia Simmons Quintet to your meeting, “The Low Down at the LowDown”! What a night, great attendance, wonderful food and drinks, and fabulous music by Cynthia and her Quintet! Events like this are another reason why your program is such a success! Thanks again for inviting us!
What a fabulous performance by the Cynthia Simmons Trio on September 8th at Sisserou’s! A full house enjoyed a wonderful night of great music and great food! Thank you Sisserou's for another fantastic Live Music Night and we look forward to having the Gemstar Caribbean Steel Band on October 13th!
The celebratory events may be finished but the year is still going strong! Congratulations on your 10th anniversary Guthrie Green!
Tonight!!
Still on of my favorite lunches! Thank you Sisserou's your Bake n' Shark is delicious! See you September 8th when Live Music Night features the Cynthia Simmons Trio!😊😁
Treat yourself to a fabulous night of Jazz and more featuring the velvety voice of Booker Gillespie, the smooth guitar sound of Frank Brown, and the meticulously melodic bass play of Jim Bates.
Loading Comments...
%d bloggers like this: